Are Account Moochers Putting Your Money at Risk? [Survey]

Sharing is caring, or so they say. But in today’s world with ubiquitous online subscriptions, sometimes sharing means putting sensitive information at risk. And it’s especially ill-advised during this golden age for hackers and digital thieves. Nevertheless, sharing streaming accounts, like Netflix and Hulu, is incredibly common. Perhaps you’re currently streaming from someone else’s account as you read this.

The team at Beyond Identity recently surveyed more than 1,000 people across the U.S. on the subject of password sharing for their subscription services. The report uncovered the percentages of each major service provider having their accounts shared, the damages this has caused the account owners, and the ways in which people have attempted to remove moochers from their accounts. If you’re looking to protect your own account or remove moochers of your own, you’ll want to keep scrolling.

Motivations and methods for sharing subscriptions

Sharing is not created equal across all platforms, as evidence will soon reveal. This first piece of our study asks respondents which platforms they subscribe to, which ones they mooch from, and exactly who they’re sharing with (or borrowing from).

Netflix was more likely than any other streaming service to be “mooched,” although the platform itself likely wouldn’t think of it that way. The company has always been relaxed on password sharing capabilities and has even somewhat encouraged the behavior in the past. Eighty-four percent of users with this platform shared the account with at least one other person. That said, more than half of Hulu, Disney+, and Prime subscribers also reported mooching.

Certain platforms had an interesting dynamic with regards to mooching and sharing. While something like Disney+ may have been more wholesome for family-style sharing, HBO Max was primarily shared among friends. HBO is notorious for its “adult content,” which probably isn’t something people are going to want to mooch from their parents. Disney+, on the other hand, may be shared with a variety of close contacts, as this particular platform had the highest moocher-to-subscriber ratio, with an average of eight moochers for every three subscribers.

Passwords are the single biggest cybersecurity threat on any site or account. On streaming services, password sharing came with its own risks as well. This piece of our study looks at some of the consequences, notably financial, that respondents have experienced due to shared accounts. 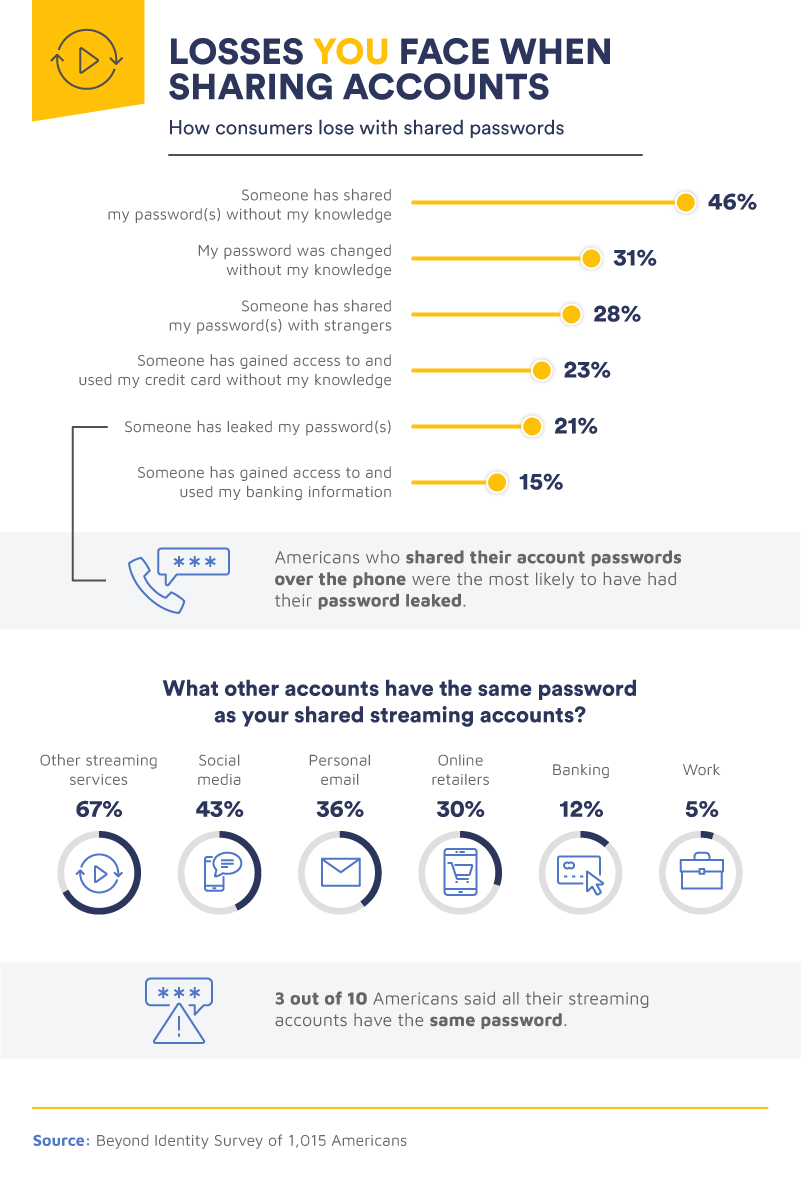 Nearly half (46%) said someone had shared their password with someone else without their knowledge, while 31% experienced another person changing their password without their permission. Oftentimes, this sensitive information was shared with complete strangers. It’s important to note that the password they had shared or lost wasn’t always just their password for Netflix or Hulu: Many respondents admitted that this was the very same login key they used to access other accounts like music streaming (67%), social media (43%), or even their bank (12%).

This rampant password sharing combined with the lack of unique passwords for financial information led to some horrible experiences for a substantial portion of Americans. Nearly a quarter said that someone had both accessed and used their credit card information this way. Less commonly, but far from unheard of, 15% of password sharers said someone had ended up accessing and using their bank account information as well. It’s no wonder passwords are becoming outdated altogether.

With all of these risks respondents were directly experiencing, we wanted to dig a little deeper into why they were putting themselves at risk in the first place. Were they getting to split the costs for these services, or was it simply out of the kindness of their heart? 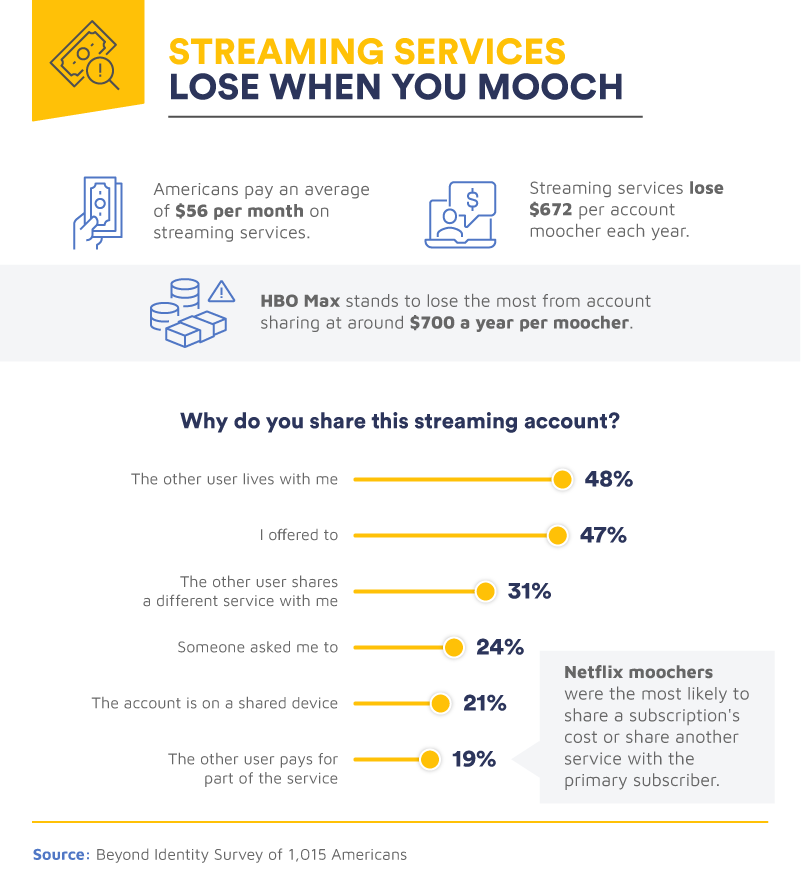 Especially since the pandemic, streaming services have almost become a necessity. People are certainly spending on them as if they were: The average American is currently dishing out $56 every single month on streaming services alone, even in a time when groceries are becoming relatively unaffordable. Much of this cost was also evaded by moochers. On average, streaming services lose $672 per moocher annually. Unsurprisingly, streaming services are making moves to plug this money leak. Netflix recently announced it would start charging those who share accounts, leading to an uproar among customers.

So why are people so willing to bear the cost and share the benefits of streaming with others? Our study found that it was because 48% of account holders live with their moochers. Presumably, this means they’re likely to watch shows together, perhaps on the same screen, and there’s no skin off the account holder’s back. But oftentimes, people were asked to share and didn’t want to say no. Only 19% of people were able to say the other person using the account actually helped pay for the service.

Removing moochers from your accounts

Whether your account has been hacked or your beloved Netflix starts cracking down on sharing capabilities, there are plenty of reasons to start kicking moochers off of your subscriptions. This last piece of research asks respondents to share their personal methods for removing people from their accounts. 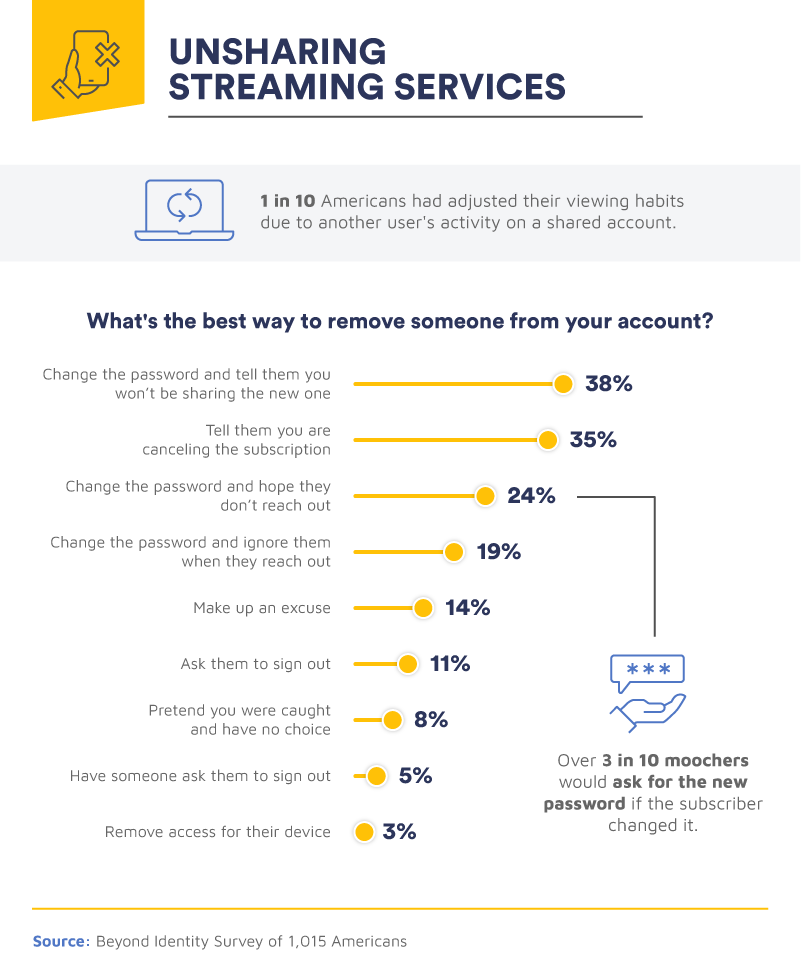 Changing behavior is evidently very difficult. Respondents were more than twice as likely to let their credit card information get hacked and used than they were to update their viewing habits. Everyone from neuroscientists to psychologists and personal trainers have studied the difficulty of behavior change—yes, it is hard, but it’s also worth it and can prevent everything from disease to depression. Evidently, it can help prevent financial theft as well.

For those who did take the initiative and begin the process of separation from their moochers, the most common approach was to change the password themselves as well as let the person know they would no longer have access. Many account owners took the less upfront route and instead changed the password in the hopes the other person would never reach out (24%) or simply ignored them when they did (19%). These efforts don’t deter all moochers, however: 30% of moochers said they would gladly ask the owner for the new password if they noticed it had been changed.

Moving on from the moochers

Changing behavior is clearly not easy. Even with passwords being leaked without permission, credit cards being stolen, and moochers not having to pay any of the price, respondents were often still hesitant to adapt their behavior. And when they did get the courage, they were often unable to update the account with honesty and resorted to making excuses.

But it’s ultimately not the account holder’s fault—passwords themselves are outdated, overly risky, and difficult to manage. Changing behavior in this particular area is actually easier than ever before, simply by working with Beyond Identity. Beyond Identity offers multi-factor authentication solutions that completely eliminate weak and compromised passwords in the first place. There are no insecure factors used like one-time codes, SMS text messages, push notifications, or magic links. There’s no need for second devices, and most importantly, no more compromised accounts. Plus, with a security framework that cryptographically binds identity to devices, users and companies are in full control of which devices are allowed to access their accounts, while also logging in with way less friction.

Though sharing passwords may not be ideal, sharing this information can certainly help others keep their information safe. If you’d like to send this research to someone, you are welcome to do so. Just be sure your purposes are noncommercial and that you link back to this page.

The Importance of User Experience in Customer Authentication