A sense of security is often a driving force behind decision making, but how much weight does it hold when selecting a phone? Though Android smartphones dominate the global market, the U.S. has been historically partial to iPhones. With privacy concerns mounting worldwide, the team at Beyond Identity decided to speak to over a thousand Americans to see how secure they felt with their Apple and Android devices.

How often have iPhone users been hacked compared to Android users? Which subset is thinking of making the switch because of security? And which consumers are exhibiting generally safer behavior, regardless of how their phone operates? If you're questioning your phone choice or looking for experienced users to weigh in, you're in the right place.

How safe do users feel?

The study began with an initial pulse check into how iPhone and Android users feel about the security of their devices. We also found out what Americans had to say about using the data storage services offered by iCloud and Google. 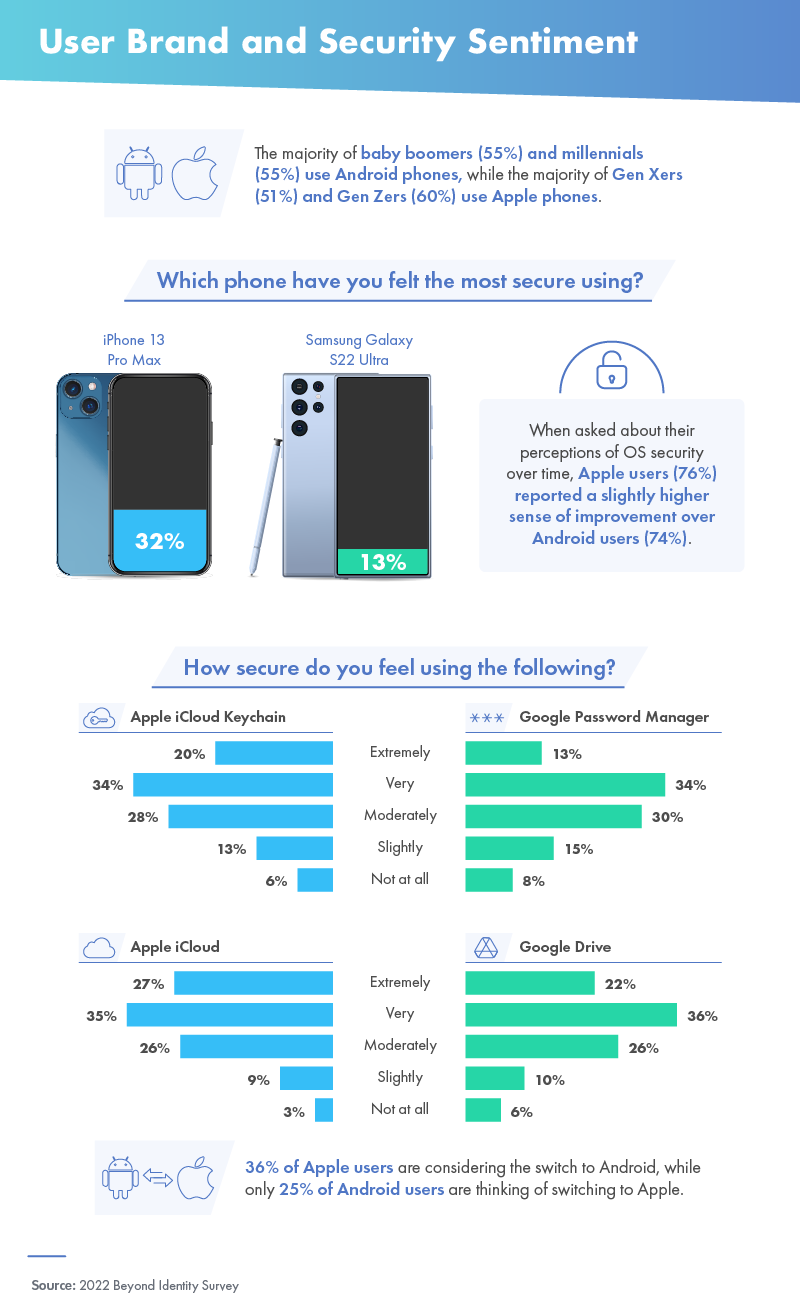 According to the users of each type of smartphone, the iPhone 13 Pro Max felt remarkably safer than the Samsung Galaxy S22 Ultra. In fact, iPhone 13 users were more than twice as likely to say that theirs was the most secure smartphone they had ever used.

Smartphones weren't the only pieces of tech where Apple users reported a heightened sense of security. Apple iCloud Keychain (the company's password storing app) users were seven percentage points more likely than Google Password Manager users to feel "extremely" secure about their password storage method. Still, there's an inherent risk to the convenience of password storing—and even using a password in the first place—compared to more secure passwordless solutions.

In perhaps one of the most convincing statistics, current Android users in the US are highly likely to consider switching to Apple, specifically because of updated security features. Of the Android users considering the switch to Apple, nearly  half (49%) cite the  perceived security and privacy superiority of Apple’s operating systems as the main reason.

While newly released operating systems often come with improved security features, Apple's upcoming release of iOS 16 is what led 33% of Android users to consider switching to Apple. The release introduces extreme security features designed to protect users from highly targeted mercenary spyware, including "Lockdown Mode," which strictly limits or completely shuts down apps and protocols that can put the user at risk of cyber attack.

We looked at how users of any device behave regarding digital security. Which ones are using better safety practices? 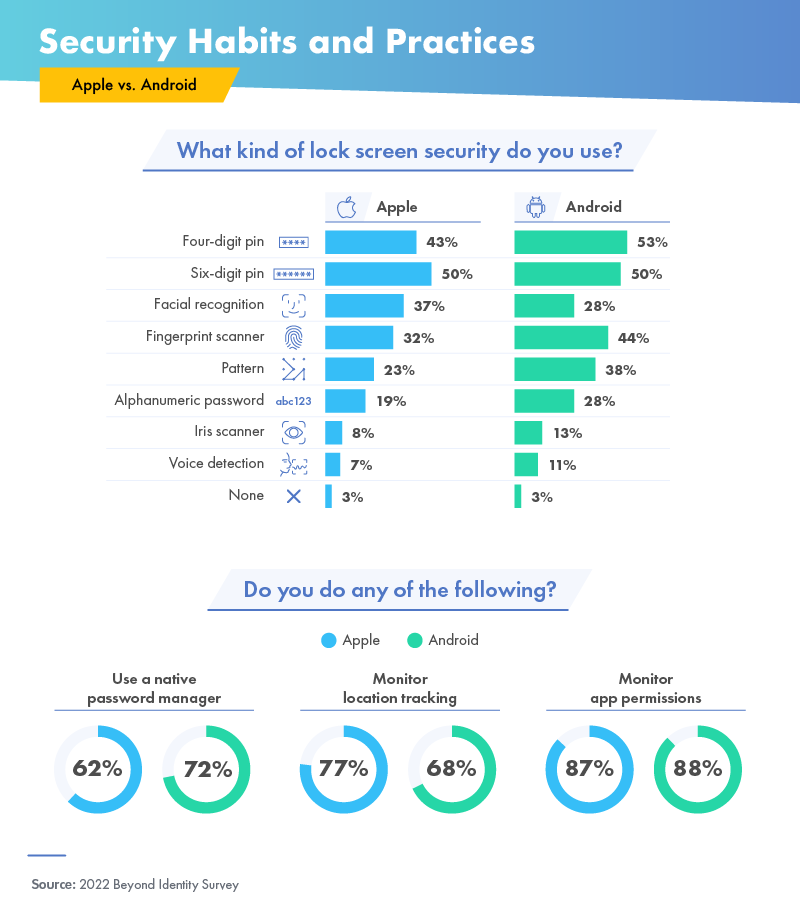 In this last piece of our study, we asked respondents to share their experiences with security breaches on their iPhones and Androids. We also asked about how well they were able to recover information and finances after these unfortunate events occurred.

Neither Apple nor Android users were strangers to hacks and security breaches: 40% or more of both groups had experienced malware attacks or cyber scams. However, Apple once again had the advantage: More of their users reported never experiencing a security breach of any kind. And when breaches did happen, they were 20 percentage points more likely to fully recover the data they had lost compared to Android users.

However, Apple users may have felt a little too safe as they were more likely to report regularly losing their phones—often as many as six or more times in the last six months. This may have to do with what's known as the Peltzman Effect, which theorizes that when safety measures are in place, people are more likely to take risks.

Despite the massive financial and market-share-based success of Android phones, the iPhone reigned supreme in terms of security according to users. People with iPhones reported fewer breaches and more instances of retrieving their stolen or lost information.

Apple users are also more careful with their information. They used longer passwords and disabled their location services more often than Android users, many of whom reported wanting to switch to the iPhone for security purposes. So, if you're in the market for a new phone and security is a top concern, you may want to heed the experiences of over 1,000 smartphone users.

We surveyed 1,003 Americans regarding mobile phone security habits and sentiment. Of these, 505 respondents use Android phones, and 498 use Apple phones. The mean age of respondents was 38 years old. Among them, 61% were male, and 39% were female. Respondents comprised the following generational breakdown: 19% Gen Z, 44% millennials, 24% Gen X, and 13% baby boomers.

To help ensure that all respondents took our survey seriously, they were required to identify and correctly answer an attention-check question. Survey data has certain limitations related to self-reporting. These limitations include telescoping, exaggeration, and selective memory.

Beyond Identity offers revolutionary and invisible strong authentication with passwordless authentication. This means security without friction, frustration, or risks. Just three unphishable factors can protect you and all of your information for life. You can start laying a zero trust foundation today with passwordless MFA and phishing-resistant MFA.

The Apple versus Android debate has been ongoing, but perhaps you're ready to contribute your two cents? If you'd like to share this research with your audience, you're welcome to do so —but please be sure your purposes are noncommercial and that you link back to this page.

How Do Chrome Users React to Password Alerts? (Survey)